Filipino and Panitikan excluded as core subjects in college: Aye or Nay 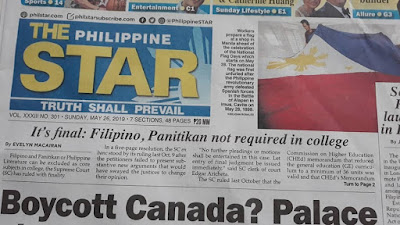 The Supreme Court (SC) has ruled with finality that the Filipino and Panitikan or Philippine Literature can be excluded as core subjects in college. “No further pleadings or motions shall be entertained in this case. Let entry of final judgment be issued immediately,” said SC clerk of court Edgar Aricheta. The SC en banc stood by its ruling last Oct. 9 in a five-page resolution after petitioners failed to present substantive new arguments that would have swayed the justices to change their opinion. This decision has been criticized by those who believe that it is a necessity to include the country’s native language in core curricula. In a statement , CHED Chairperson Prospero de Vera III said promoting Filipino language is not limited to teaching it in schools. Moreover, De Vera said - "The accusation of critics that CHED is anti-Filipino is wrong," "The Commission believes in the fundamental role played by language in education. To be p
Post a Comment
click here to read more >>
More posts